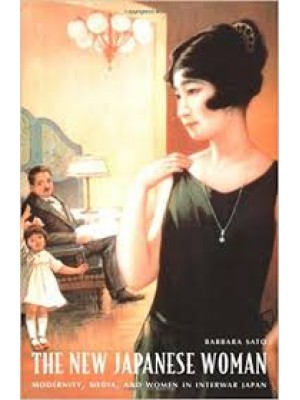 Presenting a vivid social history of “the new woman” who emerged in Japanese culture between the world wars, The New Japanese Woman shows how images of modern women burst into Japanese life in the midst of the urbanization, growth of the middle class, and explosion of consumerism resulting from the postwar economic boom, particularly in the 1920s. Barbara Sato analyzes the icons that came to represent the new urban femininity—the “modern girl,” the housewife, and the professional working woman. She describes how these images portrayed in the media shaped and were shaped by women’s desires. Although the figures of the modern woman by no means represented all Japanese women, they did challenge the myth of a fixed definition of femininity—particularly the stereotype emphasizing gentleness and meekness—and generate a new set of possibilities for middle-class women within the context of consumer culture.
The New Japanese Woman is rich in descriptive detail and full of fascinating vignettes from Japan’s interwar media and consumer industries—department stores, film, radio, popular music and the publishing industry. Sato pays particular attention to the enormously influential role of the women’s magazines, which proliferated during this period. She describes the different kinds of magazines, their stories and readerships, and the new genres the emerged at the time, including confessional pieces, articles about family and popular trends, and advice columns. Examining reactions to the images of the modern girl, the housewife, and the professional woman, Sato shows that while these were not revolutionary figures, they caused anxiety among male intellectuals, government officials, and much of the public at large, and they contributed to the significant changes in gender relations in Japan following the Second World War.