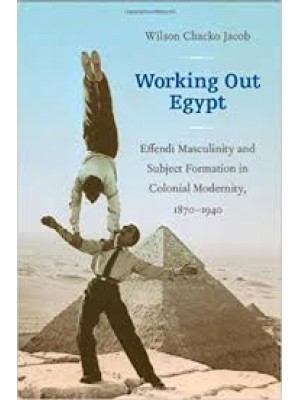 Working Out Egypt is both a rich cultural history of the formation of an Egyptian national subject in the late nineteenth century and early twentieth and a compelling critique of modern Middle Eastern historiography. Wilson Chacko Jacob describes how Egyptian men of a class akin to the cultural bourgeoisie (the effendiyya) struggled to escape from the long shadow cast by colonial depictions of the East as degenerate, feminine, and temporally behind an active and virile Europe. He argues that during British colonial rule (1882–1936), attempts to create a distinctively modern and Egyptian self free from the colonial gaze led to the formation of an ambivalent, performative subjectivity that he calls “effendi masculinity.” Jacob traces effendi masculinity as it took hold during the interwar years, in realms from scouting and competitive sports to sex talk and fashion, considering its gendered performativity in relation to a late-nineteenth-century British discourse on masculinity and empire and an explicitly nationalist discourse on Egyptian masculinity. He contends that as an assemblage of colonial modernity, effendi masculinity was simultaneously local and global, national and international, and particular and universal. Until recently, modern Egyptian history has not allowed for such paradoxes; instead, Egyptian modernity has been narrated in the temporal and spatial terms of a separate Western modernity.