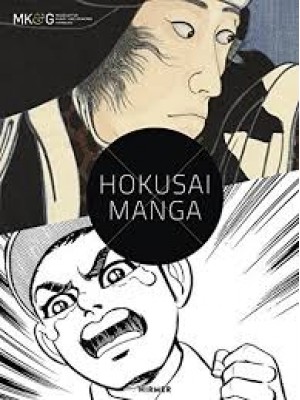 Anime and manga are powerful pop-culture phenomena, capturing people's imaginations in the pages of comic books, on television and smartphone screens, and at cosplay festivals, where children and adults alike don elaborate costumes and share creations based on the original art. Somewhere along the way, many of these cute, stylized characters jumped the Pacific, and we too became smitten with Hello Kitty and collecting adorable Pokemon. But this isn't the first time artists embraced popular culture and enjoyed enormous commercial success. In the seventeenth, eighteenth, and nineteenth centuries, Hokusai, Kuniyoshi, and their contemporaries produced colored woodblock prints of beautiful courtesans and brave samurai for the masses.

Hokusai x Manga offers fascinating insight into the most widely consumed examples of popular culture in the history of Japanese art. Woodblock prints, or ukiyo-e, were a central medium of early mass culture, and they served as a fantastical escape from everyday life. As Japan transformed into a modern nation and society, the demand for popular art didn't disappear, and the forms were merely adapted from one cultural context to another, changing to reflect the high-energy urban streets of Tokyo, but retaining many of the basic elements. Dozens of lively, colorful images--from shunga sheets to selected excerpts from manga by Jiro Taniguchi, Inio Asano, and more--are interspersed throughout the book, making Hokusai x Manga as fun to read as it is informative.

Hokusai x Manga will give Japanophiles and pop-culture enthusiasts everywhere an entirely new perspective and on these captivating chapters in the history of Japanese art.